If you are looking for a watch engraved by MNMA, you have come to the right place!
At MNMA you have several options to personalize your watch individually. Whether as a gift idea or as a souvenir for yourself. You have the free choice to have either the side or the back engraved on your watch.

We offer you a lovingly incorporated engraving on your MNMA watch. Simply enter in the contact form below which side your watch should be engraved on, there are two options to choose from:

1. SIDE:
The first option is on the side opposite the crown on the case of your MNMA. (see gallery picture 1)

2. BACKSIDE:
The second option is the back of your MNMA.
Here you have the choice whether you want to place text on the left, top right or bottom. Of course you can also have all 4 fields engraved! (see gallery picture 2) 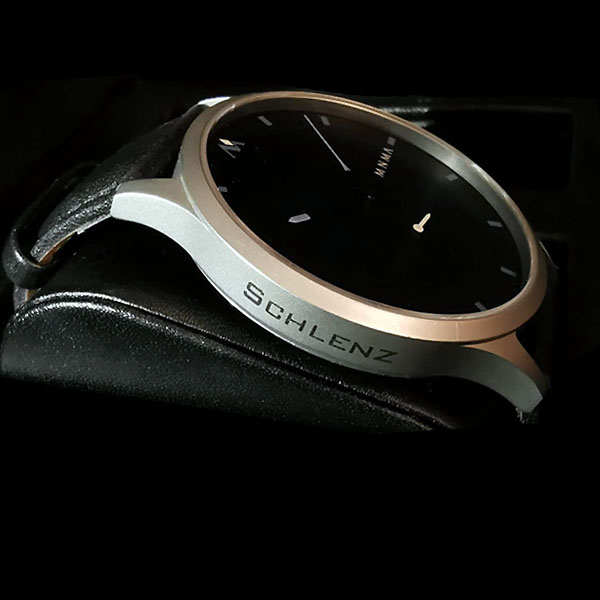 Engraving as a gift idea

For special occasions, such as at a marriage for the husband, for Christmas for dad or for a birthday for the boyfriend, a watch with engraving is the perfect gift, which always lets you look back on this special event. Each MNMA wristwatch purchased is unique thanks to an engraving by laser or diamond that will bring joy to the owner for a long time.

Important information on filling out the request form

As described above, please indicate whether you want to engrave your MNMA on the side or the back.
Then add the engraving text and the name of the MNMA model on which the engraving should appear. Please note you have 4 fields to choose from when engraving on the back, as shown in the gallery picture.
Please also indicate which fontyou would like to have, the example engravings were made with the Bank Gothic MD BT and El Greco fonts. (see gallery pictures)

Inquire about your MNMA men's watch with engraving now!

The engraving of your MNMA watch is applied by laser in the area of ​​the areas marked above. Texts are created as an outline (border). Only letters and numbers can be engraved (no emojis, pictures, etc.). The preview above is not layout-binding, it should give you an idea of ​​how your MNMA can look after the engraving.

Have your watch engraved – costs

1 ENGRAVING SIDE COSTS:
For an engraving on the side opposite the crown, we charge an additional amount of 20 euros incl. VAT of the watch price advertised on our website.

1 BACK ENGRAVING COST:
For the engraving of the back of your MNMA we charge a one-time price of 25 euros incl. VAT. plus of the watch price advertised on our website.

The costs for the engraving are not discountable, valid vouchers that are specified in the form only discount the watch. After your request, you will receive a non-binding offer from us, which transparently shows your order costs. The order is only placed after acceptance of the offer by the interested party.

Well-known types of engraving in comparison

The name “diamond engraving” implies a particularly noble workmanship and gives hope for a particularly valuable result. After all, there is a diamond in the game. The latter is undoubtedly correct, but one shouldn’t fall for the mistake, it is a sparkling gem like the one found in a ring. It’s a common tool diamond. The diamond is not used here because it gives the jewelry something special or the engraving appears particularly beautiful. Diamond tips are used solely because of their hardness, they are simply more durable than tool steel. Perhaps you have already been able to gain experience, as similar things are known from drills or tile cutting machines. When it comes to engraving diamonds, all that happens is that a diamond tool is pulled over the jewelry with some pressure. A scratch mark is made with the tip of the tool, commonly known as an engraving.

Note! The diamond engraving is only used on the back of MNMA watches!

This type of scratch engraving has a long tradition. Goldsmiths and silversmiths used to be true masters of their craft. The trick was to run the burin as evenly as possible over the piece of jewelry. Today a CNC machine usually takes on this part quite mundane. The quality of the result stands or falls with the quality of the guides used in the machine. Without strong guides, vibrations and thus unclean & frayed typefaces can occur. That is why we at MNMA attach great importance to optimum scratch engraving quality.

Laser engraving has been fighting for its image for years without justification, after all the term “laser” is omnipresent in our lives and does not sound as impressive as “diamond engraving”. Pretty much everyone has at least one Bluray player at home that laser scans discs, and many of us have a laser printer in our home. Perhaps the latter is the reason why laser engraving is so confused with laser marking. Another method is used for printing. Real laser engraving has nothing to do with laser printing. The laser engraving is not created by color, but by a burning-in effect. The fine beam of light is so energetic that it evaporates material on the surface to a preset depth. A chemical process takes place on the surface of the residual material, which provides the typical coloration of a laser engraving.

Note! At MNMA you can only choose the laser engraving of your men’s watch for the side opposite the crown.

In contrast to diamond engraving, the CNC machine works without contact with laser engraving. As a result, it is possible to design a laser engraving machine with much finer gradations than that of a conventional engraving machine. The advantages of contactless processing are obvious: laser engraving delivers clean results regardless of the jewelry material, regardless of whether gold, silver, stainless steel or titanium. The engravings always look clean and show no irregularities. In addition, there is no deterioration in writing due to wear on the engraving tool. Even if your men’s watch was engraved at the end of the working day, the result is exactly as accurate as it was in the morning, the process allows you to dispense with any precautionary measures in the form of finer texts or contours with tighter radii. This always guarantees the optimal quality of your watch engraved by MNMA.

The art of engraving is one of the oldest crafts of all. The oldest dates go back to the Stone Age; in which humans have left scratches in caves, on vessels or animal bones through their powers of observation. The development of this art with the advent of the metal age can be traced across the globe. They did not develop culturally separately from one another, but with and alongside one another. For example, the Sumerians and Babylonians developed seal engraving to perfection. Book printing and the art of minting are clear examples of the cultural value of this craft. As an ornament, as a testimony to the cultural influences of individual peoples, as it is today in the field of design, engraving has a diverse and broad spectrum. Today it is rarely found purely as a craft occupation, but has evolved over time with the help of modern technology.
If it is basically a machining process, nowadays using CNC milling machines or laser devices, permanent markings are also carried out using lasers in some areas. It is the most modern technology for which no hardened metal stylus is used anymore.
Engravings can be made on metals such as steel, brass, silver, gold, as well as on glass, stone and organic materials such as wood, paper and leather.
Some think that this leaves a personal fingerprint.

By continuing to use this site, you agree to the use of cookies. More Informations